As we continue to be bombarded with new radio models there is a developing focus on extreme features like hundeds of  memories, temperature and S/N displays, and DSP processing (which seems to work wonderfully on FM and OK on SW but has taken a few generations to mature on AM to where its benefits are greater than its detriments). Nevertheless we are in a time of explosive growth in this area.

In this report we’ll take a look at what is available in the world of low-cost AM/FM only portables (no shortwave in this report). I’ve found two radios that represent a baseline of performance for the money in the all analog and very inexpensive Sony ICF-38 (about $25) and the digital DSP-based Tecsun CR-1100 (about $50 as of this writing). Each offers good value for the very low cost if your expectations are reasonable…I also compared them with the more expensive and vastly superior C. Crane CC-Radio-EP (currently about $85). As you can see from the picture above the CC Radio-EP is slightly larger than the Tecsun CR-1100 and the Sony is smaller than the Tecsun. I won’t keep you in suspense…the CC Radio-EP is the overall best performing radio in this group as you would expect with the strongest reception (especially AM) and the best sound. But before we discuss performance specifics let’s look at the Sony & Tecsun radios in detail.

Checking Them Out:  As is my usual method I first casually tuned the AM and FM bands to see how my familiar targets (stations) came in on the radios. I was gratified that I didn’t hear any digital hets, squeals and noises on the Tecsun which seem to be epidemic among DSP-equipped radios these days on the AM band. The Sony seemed a hair less sensitive on AM as I would expect but it wasn’t bad…my 100 mile daytime stations were there and listenable, even if not quite as local -sounding as on my best portables. The two radios seemed closer on FM though although the Tecsun was a bit better. Again the Tecsun has a bigger sound than the Sony…it is after all about twice the size so again, no surprise. I then added the CC Radio-EP into the mix and this gave me a fresh perspective.

AM Reception: Neither matched the CC-EP for AM sensitivity. The Tecsun came in second and the Sony  third. But although the Sony was the least sensitive of this group, it was free of one oddity that plagues the Tecsun on some medium-strength daytime AM signals…an unnatural surging or pumping of the audio volume in sync with the program material. This unusual behavior is caused by soft muting programmed into the DSP chip for this radio…something that could be changed in future production runs if Tecsun chose to do so. The effect was less noticeable at night. (These DSP chips actually can comprise almost all of the radios RF/IF circuitry so unit to unit consistency could be wonderful if external factors were controlled…the characteristics of these chips can be controlled to some extend by how they are interfaced with the rest of the radio).  There were several medium-strength signals which the Tecsun received well enough to be listenable but they were marred by this volume surging in time with the audio. Interestingly I could often minimize this by either aiming the radio so as to slightly reduce the signal level a bit, or by the use of a loop which added enough additional signal to overcome this anomaly. Although the Sony was a bit less sensitive it was totally free of this DSP nonsense. Of course, adding a small loop made both radios much more pleasant to listen to on weak AM signals…either one did well with a loop. Also note that, like the Sangean PR-D5, the Tecsun tunes only in 10 KHz increments…600, 610, 620 so there is no ability to fine tune or tune between signals. Purists will poo poo this but we’ve lived with car radios like this ever since they went digital. Some listeners will reject any radio that tunes this way for valid reasons but for many program listeners it may well be a non-issue. To put these radios into perspective for their prices I think they are both credible performers.

FM Reception: Here the Sony and Tecsun were more comparable. While neither could pull in some difficult signals I could hear on better (and more expensive) portables, they each were reasonably sensitive and selective so the stations I tend to actually listen to came in just fine on each. Both were also closer to the C.Crane EP for FM which is a testament to what can be done for $50 and $25 respectively these days, although the EP sounded richer and fuller. 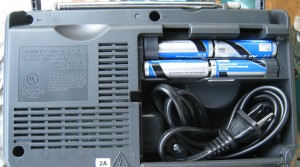 Features: Here the CR-1100 has it all over the Sony which being all analog has only the basic controls:   On/Off switch, Tone Hi/Lo switch, Band switch, tuning and volume thumbwheels, and a red Tune LED. The Tecsun is a full-featured digital portable as outlined at the top of this report with pushbuttons for quick memory retrieval pus 300 overall presets, the usual clock and timer functions and digital PLL tuning with an LED display. There are some additional nifty features made possible by the DSP chip which we have seen in other recent models, such as numerical  Signal To Noise Ratio (SN) display, signal levels in dbu, temperature readout etc. Many bells and whistles. There is also an input for an external FM antenna.

One feature sorely lacking on the Tecsun is a handle…the slight indentation on the back panel may have been considered a sufficient replacement for a real handle but once you lift the radio this way you will realize how dangerous that is. Best to just grip the whole radio firmly or hold it by its side or bottom…a strange omission.

Bottom Line: Either of these radios can be recommended as great for their respective prices. The Sony is plain and simple but hard to fault in any area….it’s a great travel radio and won’t break the bank if lost or broken and it is very simple to use…no learning curve! The Tecsun costs about twice as much, offers better sound and slightly better reception with a host of digital features…it is marred only by one digital side-effect which may drive you crazy or not depending on the signals you listen to.  But overall it’s a nice little package and fun to use. And to remind you of our benchmark, for about $30 more you can own the CC Radio-EP which gives you bigger audio and near state-of-the art AM reception in a package only slightly larger than the CR-1100. In each of these three cases, you get what you pay for!