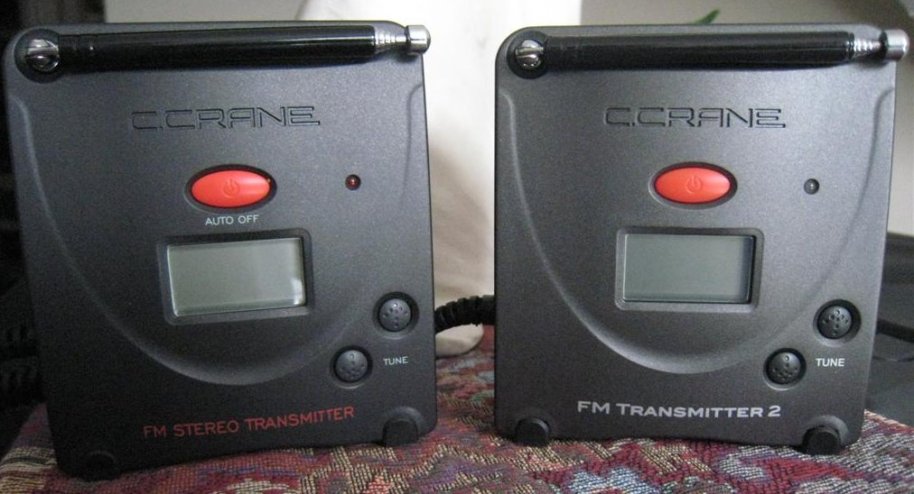 The C.Crane FM Transmitter has been one of my favorite radio-audio accessories ever since it was released. I have one connected to my desktop PC’s sound card output through an audio processor. In this configuration I can broadcast my music library to radios all around my house and out into the back yard. When guests are over I put on a radio in every room and it creates a wonderful effect. I use several of these. I have one connected to the output of my Eton E1XM Radio so I can hear XM all over the house. I have yet another connected to my Sangean HD Radio so I can listen to my favorite HD 2/3 audio streams throughout the house. With my previous car which lacked an auxiliary audio input I used the FM Transmitter to play my IPOD through the car stereo. The possibilities are endless for a device like this. 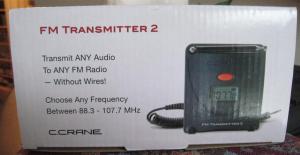 Using it is simplicity itself. It has an audio input cable with a stereo mini-plug on the end so it can be plugged into most popular audio sources such as an MP3 player, computer sound card or any audio source that has a headphone or line out Jack. It has a volume control and LED volume indicators to set your broadcast volume level (modulation) accurately.  With PLL tuning, LED Frequency readout and Up/Down Tuning buttons setting your broadcast frequency is a snap. Put in two AA batteries or plug in the supplied AC adapter and you’re on the air with your own FM station.

There are many home and automotive FM transmitters available, but I have tried countless models and was unhappy to varying degrees with the performance of all of them. Some were noisy, some were muffled, some allowed only a few FM channels to be used…one had almost no stereo separation…two samples…virtually pure mono. More recently I tried one of those FM transmitters sold from China via eBay. At first I was impressed with it until I discovered that although it sounded fine on most program material there were some sounds it simply could not reproduce accurately…things like chimes or bells emerged as distorted as a buzz saw…literally, and nothing I could do alleviated that issue. It also had diminished bass frequency response. I even had to use an external antenna mounted in the attic to reduce the hum but the distortion persisted until I finally canned the whole system. For several technical reasons it is difficult to design an inexpensive FM Transmitter that sounds even remotely as good as the real FM stations you find on the dial.

After trying more than a dozen different FM transmitters over the years, the C.Crane FM Transmitter has been the only such device I found which can deliver good fidelity, with sound that is satisfying and natural. But there has been one thing I wish could be improved about it and that is its signal to noise ratio. There was a subtle background noise which was audible on wide dynamic range material or in between songs when listening at higher listening levels or in earphones. Sort of a hum/whine kind of sound. It was subtle enough that many users never noticed it and in daily use here I must say it was seldom an issue. But if I sat intently in front of a sound system listening, listened via earbuds or simply had the volume up at medium to higher levels, as songs faded out there was a background noise that was not there on the original program material. Oh well…it’s good enough I thought – at least, this is as good as it’s going to get.

Wrong! C.Crane, not content to rest on its laurels now offers an improved model…it’s called the C.Crane FM Transmitter II and I was lucky enough to get the very first one sold. The Transmitter 2 looks identical to the original model except for the name printed on the front. It has all the features of the original model and some new ones: PLL design, push button tuning, LED frequency readout (now with a battery indicator added), volume control, LED modulation level indicator, auto shut-off feature, the ability to run from two AA cells or the included AC adapter, and a mini-plug input cable for easy connection to almost any device with a Line Out or headphone jack.

SO…How Is It Improved? There are several improvements – several are due to the fact that the new model is based on the Silicon Labs Si4710-11-B30 IC. By far the biggest improvement: THE NOISE IS GONE. Of course, no audio component is 100% noise free. Noise is now so low that you should never detect it in normal use. I measured a signal to noise ratio improvement of over 10 DB compared with my original model and that is a huge improvement. In essence you will now have dead quiet backgrounds even with demanding program material played back at high volume levels. The LED Volume (modulation) indicator also gives a clue to another big improvement. In the original model it simply flashed red to warn you when levels were too high…you had to guess how often it should flash before you were over-modulating and distorting your signal. The new version has a green LED which flashes on normal modulation levels but abruptly flashes a bright RED warning when you are pushing the audio levels too hard. Back off until it remains green and you are good to go with less guesswork…a nice improvement.

A Word About Setting The Audio Level:

I did note that the new model handles high modulation levels differently than the original. Depending on the characteristics of the program material, as I approached maximum modulation I sometimes heard audio compression which kept the sound from going into over-modulation. I could also hear the audio “pumping”…dropping back a bit on certain transient sounds. The old model would easily over-modulate producing gross distortion through your radio if you didn’t adjust the level properly, while the new model limits itself. This is desirable but don’t push the volume level too hard or you will hear that pumping sound. When setting your audio input level, listen carefully and try a few different songs or audio types. Be sure the LED indicator stops flashing red except very occasionally and you should be OK, but then listen for sounds of compression in the audio. If you hear it, back off on the level just a tad more and you will notice that the sound will become much more natural…”relaxed” in audio terms. This is the correct level to use.

People have often asked why their home transmitters (of any type) don’t seem as loud as the commercial stations. The reason is that most stations use very expensive, sophisticated audio processing equipment which maximizes loudness, often at the expense of naturalness, while still preventing over-modulation. Your home transmitter will usually sound a little bit quieter than the big boys, but it also should sound more like the source material…not over-processed and homogenized. In other words, this is normal.

Other Improvements:  The new model will automatically revert to battery power if you are running it on AC and the power fails. It also remembers the last set frequency if AC power is interrupted. Finally, the Sleep Timer (auto shut off) now offers choices ranging from 8 hours down to 1 hour versus the single choice of 1 hour on the original model.

Questions or comments? Email me at:

See it on Amazon: