There’s no doubt that pocket portable radios can be a lot of fun, and not only for those of us who remember the excitement they engendered in the 1950’s, 60’s and 70’s but for anyone who wants a small companion handy for camping, travel or listening to a ball game out in the back yard or wherever you may be. Today’s pocket portables are a far cry from those radios we loved in their heyday. In most of them, modern technology has distilled all or most of the active circuitry to a single chip which can in some cases vastly outperform the discreet circuits of more than half a decade ago. However, there is still considerable variation in design, with some manufacturers choosing to reduce their costs to a minimum regardless of performance sacrifices, while others try to maximize performance these chips make possible, so modern technology is no guarantee of good performance.

Radio Shack, once a marketing giant has closed its doors but remains as an online seller and since I receive their emails on a regular basis, I decided to try two of their new pocket portables to see what they offer for the money. These radios don’t have regular model names as they once did, but are now identified by their catalog numbers which for some reason are changed from time to time. For this report I chose two Models:

Both have built-in speakers or can be used with earbuds. Certainly, I didn’t expect super performance at these prices but I was curious to see what Radio Shack is up to these days and what you can get for such throw-away prices. As it turns out they are reasonable for the cost with adequate performance on fairly easy to receive signals. In a nutshell the $18 analog-style model 1201848 was competitive with the better current day pocket portables such as the Sony ICF-P26 and the Vondior 926 and others which you can read about here:

One caveat (and I suspect this will vary sample to sample) is that the analog FM dial calibration was way off on my sample…a station at 88.7 MHz came in a at about 92 on the dial. I did verify that the radio was able to tune to 107.9 which it did although the pointer was against the right-hand edge of its movement. Again, I am pretty sure not all of them will be like this. AM dial calibration on this unit was reasonably close…again, your results may differ. 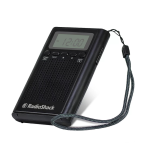 I was less impressed with the $24 model 1201849 yet it offers features not found on most other pocket-sized portables at this price; namely digital readout and FM stereo through earbuds. However, its AM reception was noticeably weaker than the 1201848 and the better of the other pocket portables mentioned above, and its FM sensitivity is seriously hobbled by an unusual antenna arrangement. In lieu of the usual rod antenna for FM, most earbud FM portables use the earbud cord as an FM antenna. If these radios also contain a speaker (and are thus not intended solely for use with earbuds) a dummy FM antenna cord is provided to plug into the earphone socket. The Radio Shack model uses neither…instead it uses an antenna imbedded in the wrist strap and this cuts sensitivity noticeably from what it might otherwise be. Still, for relatively strong signals it will work well and it will give you stereo and good sound, but be advised that this radio is best in strong signal areas. Also note that no earbuds are supplied with the radio so you will have to provide your own. The less expensive analog model had a regular whip antenna for better FM reception.

Conclusion: I think the analog-tuned Catalog No 1201848 radio at $18 is fairly priced and a decent all-around pocket-sized radio and except for possible variabilities with its dial calibration it is not a bad choice.  The digitally tuned Cat No 1201849 is a minimal performer but if signals in your area are strong it is one of the cheapest ways to get a digital radio with stereo FM. Just don’t expect to receive out of town FM signals with it.

See them at Radio Shack Online: