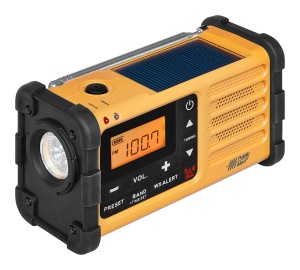 This is the first review I’ve written about an Emergency Radio. In general, I have not been impressed with their performance and it seems easy to stock enough batteries to power any of my radios for several years if needed…a scenario I don’t think it too likely. However, many people don’t want to be concerned about having enough batteries on-hand to use in an emergency, and with their recently-improved performance, the ability to deliver NOAA Weather and Alerts and to charge a cell phone when power is out I have begun to think having an emergency radio on hand might be a good idea for many people.

They have certainly become very popular in recent years, and since the earliest analog models with mediocre performance, they have come a long way. Indeed, I have a few of those early emergency radios – their analog dials are crude offering at best a guess as to what frequency you are tuned to, and their reception is not very good. Some of the earliest models had spring and clockwork-type mechanisms which you wound up with a crank, then they would wind down playing as they went. Very cool, and fun to watch if you happened to have one of the see-through models, but limited in their capabilities.

Today’s emergency radios use a rechargeable battery and allow charging by crank, solar power or an external power source – most modern designs use a USB input jack which can be charged from a computer or plug-in USB charger. In addition to improved overall performance there are many new features which enhance their emergency appeal.

The Sangean MMR-88 is one of the nicer radios of this type I have seen. This one has it all from Solar, Crank or USB charging to a DSP Digital Tuner, Cell Phone Charging, NOAA Weather with Alert, flashlight with strobe or S.O.S. signaling and more. Here are its features and specs from Sangean’s website:

The MMR-88 is a small, attractive brick-shaped radio measuring approximately 6” X 31/4” X 2 ¾” in a bright yellow color accented by black rubberized edges. It is fairly rugged, moisture-resistant and has just about every feature you could imagine in an emergency radio along with good to excellent radio performance. In detail, it’s FM tuner is excellent, rating **** in my FM Mega Review. It also boasts very strong reception of the 7 NOAA Weather frequencies…it is as sensitive as any Weather Band radio I have tested. The AM is more typical of emergency radios, rating ** in my AM Mega Review. It is actually fairly sensitive on AM and does a credible job of pulling in out-of-town signals but a few frequencies have spurious DSP artifacts which somewhat interfere with reception. Depending on what frequencies your favorite AM stations are on you may or may not notice this…my sample has this noise on 1080 KHz but not on any other frequencies I use here…such spurious noises often vary a bit in frequency and intensity from sample to sample.

In Use Characteristics: The MMR-88 is simple to operate but here are a few things I learned about it. First, the On/Off switch must be held for about a second to turn the radio on or off…a quick button press will do nothing. Also, when you turn the radio on you will automatically be in the 90-minute Auto Shut Off mode which prevents unintentionally leaving the radio on for extended periods. You can defeat this auto shut off by holding the Power button down a second longer until the timer icon extinguishes…it quickly becomes very intuitive.

Charging: I was able to verify that one minute of cranking provides about 7 minutes of play time but I recommend you reserve the crank for emergencies when you have no other power source as it would take a very long time to fully charge the battery. The USB charging feature is probably the most convenient way to fully charge the battery – solar power in direct sunlight will also do so in about 15 hours. If you put the radio in sunlight frequently you can easily keep the battery topped off that way. I found the radio will charge in typical daylight conditions even when not in direct sunlight but charging will take proportionately longer that way. I ran the battery down until the radio shut off, then placed the radio outside in the early morning with no direct sunlight hitting it. A half hour later I got about 5 minutes of play time from it. So it appears that if it were used primarily outdoors it might be able to be maintained that way. The manual says a full charge will give about 10 hours of run time depending on volume…that may be conservative because in typical daily use I got a few weeks of play time before it needed to be recharged. I didn’t actually time it and, of course, play time is directly related to the volume you play the radio at, but overall I would judge battery life to be very good.

Overall, the MMR-88 outperforms many of the emergency radios I have seen…especially on FM and NOAA Weather Bands where reception is exemplary. It also has strong, pleasant audio for a radio this compact and with its ability to monitor hazardous weather conditions and charge a cell phone it can potentially be a lifesaver. (Note for all battery-operated Weather Alert radios: In Alert Mode, the radio is using power even when it is silent so for extended periods of using Alert Mode you should use external power or be sure to keep the batteries charged or they will run down after 12 – 24 hours).

Conclusion: At a typical street price around $50 the MMR-88 is a great value, offering a very complete set of features and overall excellent performance in an attractive, compact package. Recommended!