The All-American Five is the common name given to radios which were extremely popular in the US from the 1940’s through the early 60’s. They got their name because they all used 5 tubes whose heater voltages added up to 121 volts, which allowed them to be connected in series across the AC line voltage without the need for a costly and heavy power transformer, plus this meant they could operate from AC or DC current as both were still in use…hence their popularity. AA5’s were marketed in the hundreds of thousands under every brand name imaginable but all used essentially an identical circuit. Earlier versions used  octal tubes; typically a 12SA7 Converter, 12SK7 IF Amplifier, 12SQ7 Detector and 1st Audio, 50L6 Audio Output and 35Z5 Rectifier. Later sets used miniature tubes, usually a 12BE6, 12BA6, 12AV6, 50C5 and 35W4. Actually the AA5 was an upgrade to earlier 4 tube designs which used 4 tubes and a resistive AC line cord…they got hot enough to earn the name “curtain burners” so in that sense the 5 tube re-design was an advancement…if you can call it that. The AA5’s were mass-marketed, inexpensive radios…you could certainly buy nicer sets but I chose the AA5 because of its extreme popularity plus the fact that GE was trying (with the introduction of their P780) to produce a set that was better than the small transistor portables of 1958…their stated goal was to match the performance of the typical tube radio of the day and an AA5 was as typical as you could get.

There was big safety issue with these designs – they had one side of the AC line connected directly to the chassis. To make them a bit safer these sets used insulation to protect the user from contact with the chassis which could result in a severe shock under certain conditions. Later designs used a floating ground with the AC cord isolated from direct connection with the chassis but still connected to it through a capacitor which could nevertheless pass enough current to give a nasty shock if the user was grounded while contacting the chassis. You can find a wealth of information online about All American Five radios, their safety issues, restoring and making them safer, but for our purposes we merely need to understand that the All American Five was the most popular table radio in the US from the 40’s through the 60’s, and they tended to perform more or less similarly.

Enter the Transistor: By the mid to late 1950’s and beyond the transistor quickly replaced tubes because transistors were smaller, lighter and needed far less power, so battery operation became much more practical. But although the earliest transistor portables (we called them simply “transistors” back then) were exciting and fun to own, they were generally poor in sound quality and reception capability. While we didn’t expect ground-shaking performance from shirt pocket portables, even the larger “lunchbox-sized” transistor radios fell short of what the older All American Five radios could do. After all, transistor technology was still in its infancy and it was expensive compared with tubes, plus there were limitations in performance even with more ambitious sets. 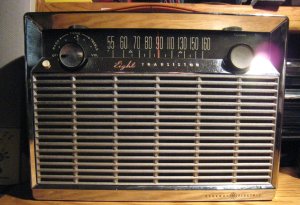 In 1958 General Electric sought to produce a transistorized, battery-operated portable that would, for the first time, match the performance of a typical tube radio. According to the lead designer, Conrad Juston, “In 1958, all portable transistor radio performance and specifications compared very unfavorably with tube radios, so (we) decided that the department should design a radio that was both rugged (durable) with high sensitivity, selectivity and very good sound. The result was the (GE) P780….” You can read an in-depth look at this series here.

From that article, “GE’s stated goal with the P780 was to design a full-size no-compromise transistor radio that would equal a tube radio’s performance in every area yet still be portable”. If you read that article you will see that I rate the P-780’s performance very highly…it comes in at **** in the AM Mega Shootout article.

However I never put it side-by-side with a typical tube radio in a critical test to see just how they compared so for this report I’m going to do just that. I happen to have two AA5’s, completely reconditioned and working up to original specifications. From 1946 an RCA 65X1 in brown Bakelite using octal tubes and from 1962 a GE C415 in Aqua which uses miniature tubes. Other than the different type of tubes used (which should perform similarly) the RCA uses an air core wire loop wound around the rear panel of the radio which was common before ferrite rods became the norm…the GE has a ferrite rod.

How Did They Compare? I won’t keep you in suspense…the GE P780 fairly trounced both of the All American Five tube radios in terms of RF performance (reception) and sound quality. I suppose I shouldn’t have been surprised. After all, the P780 has a tuned RF stage which puts it ahead of the AA5’s which lack one. Although tubes tend to have very low noise and therefore provide great reception of average strength signals, the weaker stations were just louder and clearer on the P780. The P780 also had an advantage as it was not hindered at all by the small amount of noise on the AC line at my house, but in some circumstances this would cause an even greater advantage to any battery powered set.

But the P780 also sounded far better than either of the AA5’s…partially due to the bass boost built in to the amplifier which gives it a fuller, warmer sound. It also has a tone control which neither AA5 radio has. The tubed radios sounded rather thin next to the P780…in this comparison the RCA 65X1 was somewhat nicer sounding than the GE C415.

Conclusion: If Conrad Jutson and his team at GE set out to design a radio which equaled the performance of the typical table radio of the day they succeeded far beyond that goal…the P780 is a far better receiver than the two tube radios I compared it to. To be sure, there were more expensive, more capable tube table radios and console radios available with bigger tone and greater station pulling power, but in this comparison against a typical 5 tube radio the P780 emerges as the clear winner.