Several Steps Forward, but a few back too:

Eton’s Grundig S450DLX Field Radio is a somewhat large portable by today’s standards, measuring 12.2 x 8.5 x 3.8 inches. It is PLL tuned, covering AM/FM and SW with continuous coverage from 1.7 to 30 MHz.  It is powered by six D cells or AC Power via an included adapter. Features include a sleep timer, a wide/narrow bandwidth switch, fast/slow tuning with a tuning lock feature, a Quick Tune button to make it easier to quickly tune across a band, Bass and Treble controls, an RF Gain control, 50 memories (10 per band), 12/24 hour clock, dual alarms, FM stereo at the earphone jack, an antenna jack (F connector) for FM/SW and spring loaded clips for an AM antenna and Ground, an AM IF Output jack (F connector) for outboard  DRM or SSB adapters, line input and  output jacks, an earphone jack, a DX/Local switch and External/Internal antenna switch.

The Grundig S450DLX is the obvious successor to their S350,S350DL series of radios. A comparison of the S450DLX with the Redsun RP-2100 (and similar C.Crane CC Radio-SW) shows many external similarities such as:

Both have a button uniquely labeled Q. Tune (Quick Tune) that jumps from one frequency segment to the next to help you get from one end of a frequency band to the other more quickly

Both are dual conversion

Both have an IF output for outboard SSB or DRM adapters

Almost all features and controls are the same.

An engineer friend disassembled his S450 and reported that it has a completely redesigned (from the Redsun RP-2100) circuit board and the same RF/IF IC Chip (LA1260) used in the top performing CC Radio-EP. Also he found what appears to be the same speaker as the Redsun and a 5 ½ inch Twin Coil Antenna. Too bad they didn’t go with an 8” rod there.

The S450DLX offers several improvements over the S350 series but is less desirable in some ways too. The biggest improvement is in SW. Unlike the S350, the S450DLX is PLL Tuned and Dual Conversion making it a far more stable (no drift) and no need for the annoying Tuning Lock feature of the older models, which, although it reduced the drift which plagued that entire series, made fine tuning, especially on SW, frustratingly touchy and difficult. Also, because the new model is Dual Conversion, there are none of the false images so prevalent on the 350. Overall SW reception on the new model was at least as good as on the older one, perhaps a bit better.

On AM (MW) however it is a different story. The S450DLX falls prey to a problem which has plagued many new radios over the past few years…radios using the new IC Chips which now comprise so much of the critical RF/IF circuitry is prone to spurious tones and noises across the AM band, rendering reception, even of fairly strong local signals, annoying. I don’t know about you but I don’t like hearing a steady tone over my local AM stations and the S450DLX is as bad in this respect as any I’ve heard. Horrible. Eton should be embarrassed to allow such an otherwise nice radio to be marketed with what I deem to be a crippled AM section. No AM radio lover will like this.

FM: At first I thought the FM was grossly inferior to both the Redsun RP-2100 and the older S350, but once I discovered that reception was better when I off-tuned a bit I found it was reasonably good. I did not test it further.

Sound: On its own the S450 sounded just fine. It was at least as good as the older 350 if not a bit better. But it didn’t match the RP-2100 model on which it is so obviously based…that radio has much more bass and treble compared with the 450. They appear to use an identical or extremely similar speaker.

Unfortunately the defect rate of the initial shipment has been high. My sample had a non-functioning DX/Local switch and the FM frequency readout was off by a few KHz. According to one large retailer, “We already have skids of returned defective units…most had FM’s that went dead after a very short period of use”. Frankly I’ve never heard a retailer admit something like this before. I expect these are production-related problems that can be corrected. But the spurious tones which ruin AM reception are more likely an inherent design problem which the engineers have not resolved. We know this can be accomplished as there are other radios based on these same chips, at least one of which offers excellent AM reception, which do not suffer from these spurious tones on AM. The noise can be suppressed if Eton feels it is important enough to do. And why not throw in an 8″ ferrite rod? The CC Radio EP uses the same RF/IF Chip and with its 8″ rod is one of the most sensitive AM portables I’ve ever had.

I don’t usually write negative reviews…I generally buy radios I expect to like and then I enjoy writing about them to let others know what they are like. I try to always report what I consider to be strengths as well as weaknesses so the reader can understand each radio’s unique personality. But in this case I felt compelled to report my findings because this class of radio is expected to have solid, at least decent, performance.

I think this radio could be a winner if Eton decides it is worth their while to make it so. Clearly the quality control issues will have to be addressed to resolve the FM tuning discrepancy and outright failures. But I am more concerned about the noise, whines and tones which affect many stations on the AM dial. I’m concerned because these AM problems have become common in many of today’s newest IC-based radios. Clearly the designers and manufacturers hear these noises and have decided it’s not worth spending the time and money to correct. But we also know they CAN be corrected because it has been achieved in a few, notable new models. So Eton (along with Redsun, Tecsun, Degen) I hope you will consider that many AM radio lovers cannot put up with this kind of AM performance and once-and-for-all work to achieve the best level of performance these new chips can provide.

As for the sound, there seems to be no good reason why the sound couldn’t match the frequency range of the RP-2100 from which this model evolved. The speaker size is the same, the cabinet is larger, the amp powerful enough. Maybe an easy tweak?

If Eton can fix these issues I would like the radio. It has a wonderful tuning feel with its’ large tuning knob with ample finger dimple, it has PLL and Dual Conversion, it has decent sensitivity with the exception of the AM noise problem and its lighting is actually quite pretty. 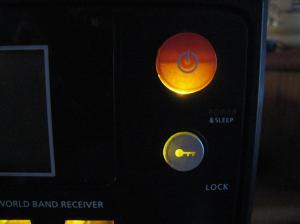 I’ll report back with any updates and I request the input of anyone with info to share about their experiences. I’d love to see this situation turn around.