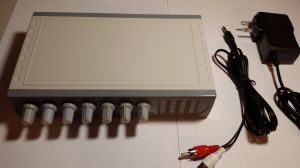 I bought one of these great little compressors to use with my home FM and AM transmitters and I have not been disappointed. As a lifelong professional and home broadcaster it represents the first time I have been able to get my home radio broadcasts to approach the consistent, full sound quality of the professional stations. There are many reasons why you will never totally match the sound of the pros in all its nuances but this piece of equipment has gotten me closer than ever before and I am thrilled with the results…for the first time my home “stations” begin to resemble the sound of real broadcast stations. Although I am familiar with professional broadcast audio processors of many types, I was initially a bit confused about the action of some of the controls because they have been setup internally in an unusual manner, but Sean was very helpful in explaining the topography of the unit and his answers to my questions demystified the setup process. I will explain as we go along and I hope my comments will help you set yours up if you decide to buy one.

There are several, and they differ between Part 15 (so-called Home or Hobby Broadcaster) AM and FM transmitters. Without getting into too much detail, AM transmitters which use short wire antennas have a built-in limitation with high frequency response. And since AM signals are susceptible to noise problems it is desirable to maintain reasonably consistent volume levels to help override that noise.

FM transmitters have trouble with respect to the required FM Pre-emphasis. In the US we use 75 micro-second pre-emphasis while most other areas use 50 micro-second. This is simply treble boost during transmission which is mirrored by identical treble reduction during reception which reduces noise. It works as it should but it means that music signals which cover a wide spectrum of frequencies will over-modulate at higher frequencies (treble) before lower frequencies do. In order to keep those highs under control, the rest of the spectrum may be lower in level than it needs to be. The equalization curves of the Cuthbert Audio Processor have been designed with these issues in mind.

There are other considerations which pertain to professional broadcasting as well as home broadcasters. Way back in broadcasting’s earliest days it was realized that some sort of automatic volume control during broadcast was needed, not only to prevent inadvertent over-modulation (which not only sounds bad but is illegal for professional broadcasters) but it also helped listeners hear broadcasts more clearly. Softer sounds could be increased in volume so they could be heard more easily while loud sounds were compressed before they over-modulated.

There are two general types of audio compression. So called peak limiters have little effect until the audio gets very close to 100%..at that point, known as a threshold,  they clamp down and prevent any further volume increase. Such peak limiting is generally used to prevent distortion and over-modulation.

A more gradual kind of compression works over the entire, or a large segment of the volume range, acting to maintain even volume levels. In broadcasting general compression is used to keep the volume loud and fairly constant while peak limiting is used to prevent over-modulation. This is a gross simplification but for our purposes it will explain the setup of this  compressor for those who have never dealt with one before.

Eventually, many broadcasters wanted to sound louder than the competition to make them “jump out” as the listener tuned across the dial. The resulting “loudness wars” led to some overly-aggressive processing making some stations sound pretty bad. Luckily, broadcast equipment manufacturers eventually learned several tricks to increase apparent loudness while preserving some semblance of normal sound quality. Modern broadcast equipment is extremely sophisticated and flexible in this regard, giving radio stations the option to sound reasonably loud without sounding over-processed and without over-modulating. Of course, some stations still sound over-processed but that is the result of their own setup. Stations can reduce the amount of processing to preserve more of the natural dynamic range (the ratio of loud to soft sounds) which are important to some music such as classical, while letting pop and rock stations compress the audio more heavily to create a strong signature sound, without unnatural and unpleasant artifacts.

There are many ways this is accomplished which are beyond the scope of this article, but key among them is to divide the audio spectrum into separate segments (in the simplest form, bass, midrange and treble) which can be processed independently, then recombined to create a sound which is consistent in apparent frequency response and volume. This independent processing not only reduces differences of tonal balance from song to song also prevents pumping and surging in volume. One good example of this is demonstrated in Sean’s Video Demo for this processor:

With music containing loud bass notes, a single band compressor or limiter will squash the overall volume with each bass note. With the bass processed separately this does not happen. The same is true with treble which can cause FM problems if not controlled independently.

The multi-band approach will let your home transmitter sound louder and fuller without distracting pumping or surging in the audio. And since bass, midrange and treble differences among songs will be reduced your sound will be much more consistent song to song.

Home transmitters (including the Cuthbert reviewed here) sometimes have some sort of audio compression built-in, and there are a number of stand-alone single-band audio compressors available, but if you push those limiters too hard the result will be unnatural sound.  Yet when you back off on the processing your station cannot match the volume and “fullness” of the pros. With this multiband processor, it can.

Description: Described as a 6 Channel Processor this is actually a 3-band processor (bass, midrange and treble) times two stereo channels.

From the seller’s eBay description:

—Separately and automatically adjusts bass mid and treble volumes so the whole spectrum of sound is at a constant volume.

—Individually compresses bass, mid and treble for a constant loud sound without the effects of pumping that cheaper compressors have.

—100% Analog. No latency unlike the modern digital units.

Knob 4: Bass release (changes the speed of the release)

______Release approximately 0.1 seconds to 4 seconds adjustable for each band

IN USE: Setting the Input Level: At first, I had trouble determining the correct position of that rear panel switch until Sean told me that the Input level meters are BEFORE the switch, so with the normal levels coming out of a typical audio source (in my case the sound card of a PC), the Input Level LED’s may ride in the red much of the time. This is not a problem as the unit can accept an input level up to 2 volts before distortion occurs, so although those meters give an idea of how much signal is coming into the unit, don’t worry if they run in the red! They DO help you decide which setting of the rear panel Input level switch is set. In my case, the lowest position (least sensitivity) seemed to work best – since it controls the audio level being fed to the compressors it will change the threshold of their operation and thus the overall amount of compression available. I found it helpful to listen to a wide variety of music with different tonal characteristics and varying the input level at the source to judge how the compression sounded. As you move that input toggle switch from the lowest setting to the middle position then the top position the unit becomes more and more sensitive but in my setup there was plenty of compression in the lowest setting. The input thresholds are approximately 25mv (Up), 250mv (Center) and 400mv (Down).

You should experiment with the Release Time Adjustment knobs for the three bands to get the sound you want. Turning the controls fully counterclockwise quickens the release time and can give an extremely processed sound. Backing them off just a bit to about the 9 o’clock position relaxes the sound noticeably and a setting perhaps nearer to 12 o’clock or further clockwise would be better for an even less processed sound. For my oldies-based listening through my AM and FM transmitters I ended up with the Bass Release knob at just above the maximum counter-clockwise position with the mid and treble release times at about 10 – 12 o’clock.

The Compress knob controls the overall compression ratio from infinite which will sound very overly processed to minimum which eliminates all compression. Start with it somewhere near the middle of its rotation then experiment to get the sound you want. Also, be aware that more compression (turning the control further counter clockwise) reduces the output level which you can see on the Output LED meters. You can compensate for this reduced output by raising all three Level controls as needed.

Note: The Cuthbert AM transmitter does not have an Input level control but it does have a built-in limiter. To reduce the action of the transmitter’s compressor (as its effect would be added to the compression effects of the 6 Channel Processor), I keep the Processor’s output on the low side.

Conclusion: Sean explained to me that in order to emulate the audio performance of multi-kilobuck professional audio processors like the well-known Optimod he patterned this processor after but at a very tiny fraction of the cost, there inevitably had to be some compromises. Fortunately, he made some clever design choices which resulted in great performance by home hobbyist standards with the only drawback being some less-than intuitive setup procedures…but once I understood how he designed the unit I was able to get great results which have transformed the sound of my home broadcasts…the results are truly awesome. (Maybe Sean could be persuaded to revise his owner’s manual because the information he gave me directly made all the difference. Setting up audio processors is something that takes a bit of understanding…since I worked in broadcasting most of my career I have considerable background with this kind of equipment but for the average user a better set of instructions would certainly help…I hope this article will aid somewhat in that regard).

I have spent hours listening through my FM Transmitter (a C. Crane FM-2 which is a very high-fidelity home FM transmitter) and a few AM transmitters including the Cuthbert reviewed here.  I have really enjoyed the much-improved sound of some very familiar music. In particular it is exciting to hear the bass line of many oldies emerge with more punch and clarity than they ever did before…but also my FM station now seems about as loud as the big boys without audible artifacts. I LOVE this new toy!

The bottom line is that I don’t know of any other affordable audio processor that will give you these results…this great sound, anywhere near this price. My home broadcasts are now louder than they were before and the sound is fuller and more consistent, sounding much more like real broadcast stations. I also got rid of the annoying pumping sound I was getting using a single band compressor…the three-band design works wonders.

The Cuthbert Multiband Processor is ideal for home broadcasters and has many other applications where sound control can improve the listening experience. Whether for parties or clubs, recording or home theater this little gem will give you the control you need at a fraction of the cost of professional gear.

For info or to order contact Sean at:  sean.cuthbert1@gmail.com