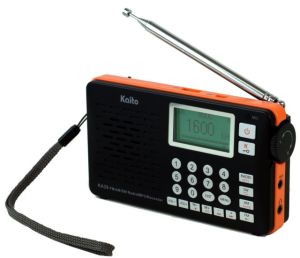 Although not a new model on the market I wanted to try one of these because I was looking for one specific capability which none of my other small mp3 players offers – the ability to scan forward or backward within a track. All the portable players I have seen (and I’ve seen a few nice ones) only let you select a track – none let you search or scan within a track. This is big problem when listening to half hour Old Time Radio shows which is what I often use my player for. The DE29/KA29 does offer this feature so I bought one to check out. I noticed that Kaito gives some incorrect specs, some of which apply only to the US settings, but I found the radio could be reset to 9 or 10K tuning steps and various band coverages just as the Degen version can, so the following specs apply to each model. All of the Degen specs apply to the Kaito version as well. Currently $35 at Amazon. 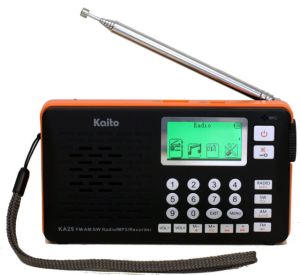 Records from radio or built-in mic

Alarm Settings: Single, Daily or Selected Days of the Week

Equalizer Selection in MP3 Play Mode (not in radio mode)

Micro-SD slot (compatible with 64MB up to 32GB size)

In Use: One important point explained in the manual is that there are three ways to press the buttons on this radio. Long Press which is about 2 seconds, Short Press which is momentary, and Hold On. Even when turning the radio on…you have to hold the button for two seconds before the display greets you with the word “Kaito” (or “Degen” if you have that version).

My usual practice is to discuss AM/FM/SW reception first in my reviews, as I regard reception as one of the most important criterions in my reviews. But in this case, I will depart from that format because this is not a high-performance radio…I will give reception details later, but for me it is primarily an MP3 record/playback device so I will discuss that aspect of its performance first.

As An MP3/WAV Audio Player the KA29/DE29 performed well overall. You can use either a Micro-SD card (up to 32 GB) which disappears into the bottom of the radio or a USB Flash Drive which plugs into the top. I listened to music and Old Time Radio shows and found the various equalizer settings were very helpful in getting the best sound out of them – this little unit puts out a lot of audio for its size. As I said earlier I also appreciated the ability to scan forward and backward within a track which none of my other MP3 players do. Navigation was similar to most such players with Folder, File Number and Title readouts, but I would call the user interface tricky to navigate. There is a learning curve for finding specific folders and files which requires sitting down with the owner’s manual and figuring out the key sequences you need to get where you want to be. The manual is also sometimes a bit vague about certain operations and even after figuring it was sometimes difficult. In my case I had several folders containing hundreds of files and it was sometimes very difficult getting to specific folders. I recommend using a smaller Micro-SD card or USB stick with fewer folders or only one group of files as it is very easy to select individual tracks but harder to navigate among several folders. This is not that unusual…the various MP3 recorder/players I have tried are more similar than different in this regard. Just be prepared to take some time before you feel at home with all of the functions dealing with file navigation.

As A Recorder the KA29 proved capable enough and is easy to master. Unfortunately, although the radio has the usual clock and alarm functions there is no automatic timer recording…you have to initiate recording manually, a sad omission. On a more positive note the recorded sound quality was good enough that through the radio’s own speaker the recordings sounded pretty much live the live broadcasts which is good. I didn’t check the files on a wide range playback system to listen for flaws as I don’t think that is the primary use of this kind of device, but again, the lack of a Timer Recording function seems a shame.

Two other notes: The volume you are listening at cannot be changed once recording begins, so set it where you want it before you hit record.

Finally, some earlier reviews reported noises in the recordings made from the radio…my sample exhibited none of that problem. As I said the recording quality closely matched the original broadcast. You can also record from a built-in mic.

As A Radio the KA29/DE29 is adequate for stronger signals but it won’t win any reception awards, especially on AM which I rate as downright poor. Even my suburban strength stations which come in very well on 4 and 5-star radios were quite noisy on the Kaito…only very strong local signals were noise free. At night with many stronger AM signals this was less noticeable but still, put it up against a good AM radio and there is no comparison. But remember that although several other radios in this general price range will outperform the Kaito on AM, they don’t offer the MP3 capability so perhaps this is not a fair comparison.

Luckily the KA29 fared much better on FM and SW where it is more capable, bringing in most of my usual signals adequately…not too bad at all. The fact there is Direct Frequency entry is a nice feature at this price, but on SW you can only input frequencies within the SW band you are in. So, if you are in SW1 and want to go to WWV at 15,000, you must use the SW key to step through the SW bands until you get close to 15,000, then you can directly key in the frequency.

Also note there are only and 9 or 10 KHz tuning steps on AM, 5 KHz on SW and 100 KHz on FM and the radio mutes while tuning so band scanning is slower than on a radio with no or less muting.

I was disappointed to learn that the EQ settings which work so well in MP3 mode are not available in Radio mode. Again, I have seen this on at least one other MP3 player I have but unless the DSP chip used in this radio is not capable of adjusting EQ in radio mode I wonder why that option is not available.

Conclusion: Although I have pointed out a few negative characteristics of the KA29/DE29 I want to balance that by saying that I think this is a good value if it suits your needs. For me, I would not buy this as a radio, but as an MP3 player it features good audio for the size and it allows forward and reverse scanning within tracks which none of my other MP3 players do, so for now the KA29 has become my MP3 player of choice. For a current street price of about $36 I can recommend it with those qualifications.

The Kaito KA29/Degen DE29 is available in two color combinations: Black/Orange or White/Blue

One Important Item Not Covered In The Owner’s Manual:

It is relatively easy to accidentally reset the radio to Chinese language through a wrong keystroke which happened to me while I was trying to figure out some of the menus. Once that happens it is nearly impossible to figure out how to get back to English as all the menus are in Chinese, or one of the several other languages available. I did some research online and found the following method to get it back to English – with these steps it is relatively easy to do.

Go down to the fifth entry (which is English) and hit menu again, then hit the Exit key.

That’s it…you’re back to English.